Difference between revisions of "OSCAR snoring"

From Apnea Board Wiki
Jump to: navigation, search

This installation guide is part of the suite of OSCAR help articles. See OSCAR Help.

How does a CPAP machine detect snoring?

CPAP machines do not have microphones attached to them. So your CPAP is not listening to the sound of your snoring. So how does it actually detect snoring? It analyzes the Flow Rate data.

When a person is snoring (at least when they're snoring loudly or persistently) there are some characteristic changes to the flow rate, and a full efficacy data CPAP's flow rate analysis algorithms can pick that up. Typical types of flow rate curves exhibiting sleep disordered breathing problems can look like any of the following images: 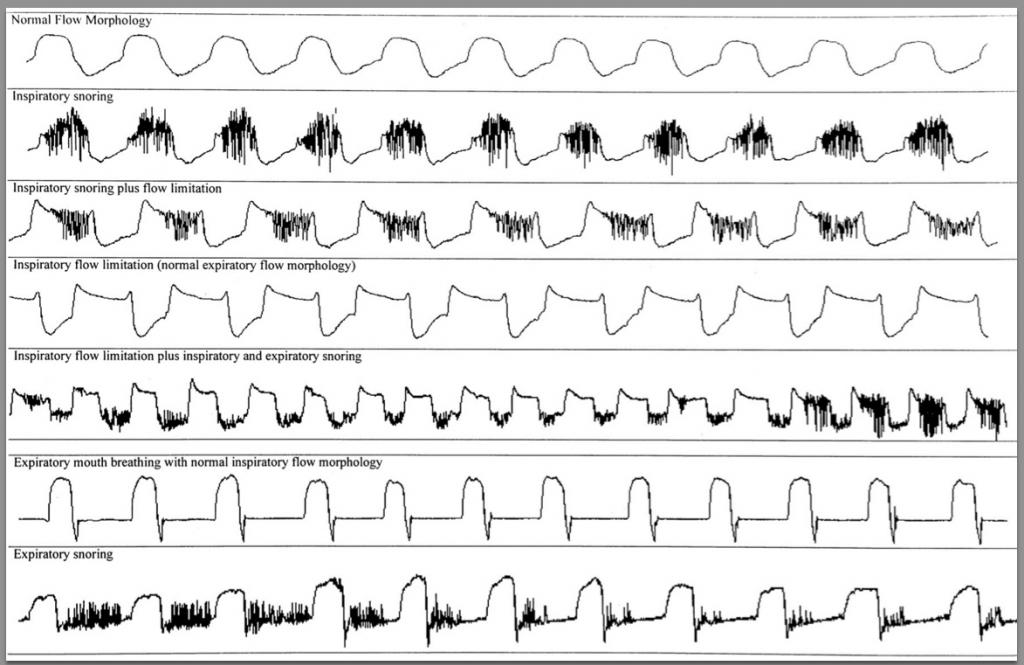 Snoring triggers oscillations in the flow rate curve. The larger and more persistent the oscillations, the worse (and louder) the snoring is. And that pattern of oscillations is what your CPAP uses to detect snoring.

Snoring data on a ResMed S9

Snoring data on a ResMed S9 is recorded as a function of time. At each time t, the machine assigns a "snore" number; OSCAR graphs those "snore numbers." Here is the same Snore graph of the same 30 minutes of sleep displayed in both ResScan and OSCAR.

The Snore graphs in ResScan and OSCAR look pretty much the same, except for how the vertical axis is labelled. In ResScan there is a cryptic icon scale that implies that the higher the snore graph, the louder the snoring. Notice that if the snoring is really severe it may go off the top of the ResScan graph.

Typically anything that's over 3.0 on the OSCAR graph has gone off the top of the scale in the ResScan graph.

While it is important to remember that the S9 has no direct way of determining the loudness of the snoring, it's also clear from the ResScan graph labels that snoring numbers above 3 represent more serious snoring than snoring numbers under 1. Somehow the S9 decides "how loud" the snoring is and assigns the snoring number based on both the amplitude and frequency of the oscillations in the flow rate curve.

Note: The S9 AutoSet and S9 VPAP Auto will react pretty aggressively to snoring. It is not uncommon to see substantial increases in pressure in response to snoring even if no OAs or Hs are being recorded.

Snoring data on a DeVilbiss IntelliPAP

Snoring on an IntelliPAP is recorded as a graph with respect to time in OSCAR. But the graph is a "square wave" graph rather than a curve. Here's a picture of a typical IntelliPAP Snore graph from OSCAR:

The meaning of the numbers on the vertical axis is unknown, but they are presumed to indicate loudness. I've seen IntelliPAP Snore graphs with Snore numbers as high as 30.

Each fat tick mark represents a ten minute time slot with at least 3 snores scored during that time period. Tick marks run together if there is snoring in consecutive 10 minute blocks.

Snoring data on a Philips Respironics System One

All about Snoring Data on the Philips Respironics System One Machines

There's no official guide to how to interpret the Snoring information from the Philips Respironics System One as it is reported in either OSCAR or Encore. In looking at Encore numbers, the assumption is that the higher the so-called "VSI" number is, the more serious the snoring is. But exactly how large that number needs to be before it's troublesome is not known. And for reporting snoring in OSCAR, the snoring data was reverse-engineered from the Philips Respironics machines and the information on why Encore presents the snoring data the way it chooses to present it is pretty scarce...

And when you start analyzing the raw snoring data the decisions Encore makes on how to present the snoring data seems bizarre from a statistical point of view. (More on that later.)

Once the snoring data was reverse-engineered, it was discovered that the Philips Respironics machines were keeping track of two kinds of snoring data; it was decided to call these two types of snore data Vibratory Snores (VS) and Vibratory Snores #2 (VS2). Those who had access to Encore Pro and had data from both straight pressure mode and auto mode were able to figure out the significance of those two kinds of snores in the Encore/PR world. Here's the current understanding:

The VS snores have time stamps attached to them, but they do not have a "magnitude" number. In the OSCAR "events" list, when you look at the detailed information for each VS snore event, the number in parenthesis will always be a 0. But VS snores are the snores that cause the Auto algorithm to respond by increasing the pressure. (On a BiPAP Auto, it's the EPAP that is increased.) For each VS scored, the machine typically increases the pressure by 1 cm. Hence if there's a cluster of VS's, the machine will keep increasing the pressure until either the snoring stops or the max pressure setting is reached. It's also worth noting that in all the data seen, in dense clusters of VS snores, the VS snores appear to be scored in roughly one minute intervals---in other words, there is usually a full minute between adjacent VS snores.

In Encore, the VS's do NOT seem to show up as tick marks in the Events table. But it's hard to say for sure. Where they do show up is on the wave form when you look at it in Encore Pro (or EncoreBasic). Of course, Encore only downloads the wave form for the last night (or sometimes the last two nights) when you down load the data. Encore Pro at least stores all the previously downloaded wave forms in the patient's database, but EncoreBasic only stores the last wave form. OSCAR also puts tick marks for VS snores on the wave form data when a Philips Respironics machine is running in Auto and the VS data is being recorded.

So as far as can be determined: The VS snores make up the part of the snoring data that is used by the Auto-algorithm when it determines that the snoring is significant enough to warrant an pressure increase. But no one (except the Philips Respironics engineers) know what the scoring criteria for a VS snore actually is.

VS2 snores are recorded by all Philips Respironics machines. They have both a time stamp and a "magnitude" number attached to them. In the OSCAR list, when you look at the detailed information for each VS snore event, there will be a NON-zero number in the in parenthesis for that event. Whether that number represents the length the snoring went on or some kind of measure of the loudness of the snoring is anybody's guess. The significance of that number is not known.

The VS2 snores show up in Encore (all versions) as tick marks in the Events table based on the time stamp of the VS2 event. But the calculation of the VSI index in Encore is not as straightforward as you would expect.

No one outside of Philips Respironics really knows the difference between the changes in flow rate that are needed to score a VS and the changes needed to score a VS2. But some of the Philips Respironics System One machines can be pretty sensitive to picking up vibrations that are coming from sources other than the patient's own airflow. But that said, real snoring is picked up by the Philips Respironics System One as well as false snoring. You basically have to look at patterns in your own data and learn to interpret based on what you know is going on at night and what you think might be going on at night.
The Snore Indices in OSCAR and Encore

OSCAR calculates the VSnore Index shown in the left sidebar of the Daily Details data as follows:

And so the OSCAR VSnore Index is nothing more than the average number of VS2 snores detected in an hour of sleep (or more technically run time).

Note: The VS events are not used to compute this index. This is important because:

If you are using a Philips Respironics System One AUTO or BiPAP AUTO in FIXED pressure mode, your OSCAR VSnore index will NOT include the VS snores in the Snore index.

Encore calculates the VSI shown on the right sidebar of the Encore Daily Detailed data in a really bizarre way. This can be illustrateed with data from the sample patient's data. On July 31, 2013, she had 3 VS 2 snores scored for the entire night. In OSCAR, the data looks like this:

Total run time for the night was 5:31:47, which is 5.53 hours. In Encore, the VSI on the right side of the Daily Detailed Data panel is reported as VSI = 1.1. Now Encore only shows three snore tick marks in the Events table on the daily data---one for each of the VS 2 snores. And the Encore Pro wave form shows only one snore tick mark---the one for the VS snore. So the total number of (relevant) snores is either 3 or 4 depending on whether the VSI is computed using just the VS 2's in the Event table or both the VS 2's and the VS snores shown only in the wave form.

Instead, with a bit of mathematical reverse-engineering, it can be figured that Encore computes the Encore VSI for the night as follows:

And this "formula" checked out on many other nights-- some with rather large numbers of snores and some with small numbers. It always seems to be the case that:

Why would Encore define the VSI (Vibratory Snore Index) in this way? It is not known. Mathematically it makes no sense. If the snores are being scored as "discrete" events (the same way the Flow Limitations are scored as "discrete events") then the intuitive meaning of VSI would be the average number of events per hour, and VSI ought to be (number of snores)/(run time)

So that then leads to the following speculation: Is it possible that the "magnitude" number on the VS2 snores represents something other than loudness (severity) of the snoring? Perhaps the "magnitude number represents the length of time measured in (seconds? minutes? number of breaths?) that snoring was being detected? In that case, the Encore VSI would then represent the average amount of "snoring time" in each hour of sleep measured in (seconds? minutes? number of breaths?)