From Apnea Board Wiki
Jump to: navigation, search

An oxygen concentrator is a device which concentrates the oxygen from a gas supply (typically ambient air) to supply an oxygen enriched gas mixture.

Oxygen concentrators typically use pressure swing adsorption technology and are used very widely for oxygen provision in healthcare applications, especially where liquid or pressurized oxygen is too dangerous or inconvenient, such as in homes or in portable clinics.

Oxygen concentrators operate on the principle of rapid pressure swing adsorption of atmospheric nitrogen onto zeolite minerals and then venting the nitrogen. This type of adsorption system is therefore functionally a nitrogen scrubber leaving the other atmospheric gasses to pass through. This leaves oxygen as the primary gas remaining. PSA technology is a reliable and economical technique for small to mid-scale oxygen generation, with cryogenic separation more suitable at higher volumes and external delivery generally more suitable for small volumes.[1]

At high pressure, the porous zeolite adsorbs large quantities of nitrogen, due to its large surface area and chemical character. After the oxygen and other free components are collected the pressure drops which allows nitrogen to desorb.

Older units cycled with a period of about 20 seconds, and supplied up to 5 liters per minute of 90+% oxygen. Since about 1999, units capable of supplying up to 10 lpm have been available.

PSA generators provide a cost-efficient source of oxygen. They are a safer,[2] less expensive,[3] and more convenient alternative to tanks of cryogenic oxygen or pressurized cylinders. They can be used in various industries including medical, pharmaceutical production, water treatment and glass manufacture. 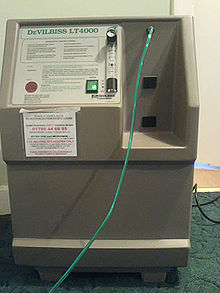 Since the year 2000, a number of companies have produced portable oxygen concentrators.[6] Typically, these devices produce one to five liters per minute of oxygen, and they use some version of pulse flow or "demand flow" to deliver oxygen only when the patient is inhaling. They can also provide pulses of oxygen either to provide higher intermittent flows or to reduce the power consumption.

Research into oxygen concentration is ongoing and modern techniques suggest that the amount of adsorbent required by a medical oxygen concentrators can be potentially "reduced by a factor of three while offering ∼10–20% higher oxygen recovery compared to a typical commercial unit."[7]

These portable concentrators typically plug into an electrical outlet and may have an internal battery or external battery pack for operation away from home. Portable oxygen concentrators usually can be plugged into the DC outlet of a vehicle, and most of these devices are suitable for ambulatory use.

The United States Federal Aviation Administration (FAA) has approved the use of portable oxygen concentrators on commercial airlines.[8] However, users of these devices should check in advance as to whether a particular brand or model is permitted on a particular airline. Unlike in commercial airlines, users of aircraft without cabin pressurization need oxygen concentrators which are able to deliver enough flowrate even at high altitudes, such as OXYFLY.[9]

Common models retail at around $1500. Leasing arrangements may be available through various medical-supply companies and/or insurance agencies.

Oxygen concentrators are considered sufficiently foolproof to be supplied to individual patients as a prescription item for use in their homes. Typically they are used as an adjunct to CPAP treatment of severe sleep apnea. There also are other medical uses for oxygen concentrators, including emphysema and other respiratory diseases.